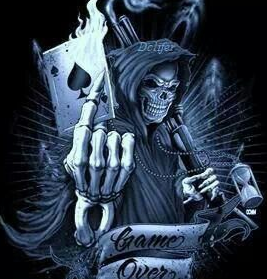 GAME OVER
Picking up where California upend in bias and idle in turmoil yet open of doors to venture now it's Utah, so we look, at leveragability again what with for many U.S. states in retrospective digital / physical paradigm shift en mass rush into the Intellectual Properties market front known, beside assets, labeled and digitized currency as coins of all manner or smart contract to online forming and merging governance and "monetized Domain Names, Patents and Trademarks" even already digitized, basically speaking. Sure there is back history for each individual property at Trademark, Registrar (ICANN) or Copyright government Offices but though here from today's global monetary structures apparent is economic collapse of  world banking and its fiat monetary policies nevertheless, "the most part" of insured banking is "new-school abomination" becoming discussed conclusively our digital desolation and is story seems that most are talking about. Moody Blues? Well as, but more for such desolation simply what just on a digital ledger the memoed Understanding Agreements.


ROME REMAINS
The Remains of Rome though are there to be had and oh yes LMAO, ha ha money is still good money just a little funny.
But let's first talk about this trend phasing assets onto decentralized financial ecosystems backed, secured and authenticated in front of the (digital) intellectual property curve and not even in money - your digital currency or mine - for the love of Pete's valuation. LOL a real manna mania huh even so we peel one eye onto that inflation economy going on over there in fiat simultaneous.
Oh Nevada always her usual question of just lady luck but not always necessarily of good or the bad, but - how "hot - out" or (the cards) is cold?

https://youtu.be/1lCIXSRgkX4
Posted by Blogspot at 5:02 AM No comments:

Email ThisBlogThis!Share to TwitterShare to FacebookShare to Pinterest
Labels: 702, My, Skeleton, Stand

Memo to READER Contrarians. Blog doesn't have like a pending trademark here. Someone keystroke some comment for us on the widening discussion of Cloudcoin's integer vision. And use as you so wish any part or all of this blog titling you see here like an honest libertarian you believe you are.
- - - - - - - - - - - - - -
My 702 DNS Land Titleship focus partnerships and news at landing website where Covenant Conference updates and announcements as well are DNS Knowledge-base Learn Center, agency converged for client brandholders and insiders sharing, extending,  monetizing, partnering and exchanging contracts, cooperatives and properties and propel the global physical-digital upgrade with prosperity unlike at any time the technological world has seen.
Titleship
So consistent this time with blog topical theme of new "World (or say California) DNS Land partnerships, consortiums or guilds" overall we know Cloudcoin and cloud currency is nothing actually any like the phenomenon of crypto-currencies in most ways or should say that crypto's not like cloud currency. And is where you break this down where the Cloudcoin's RAIDA that disambiguate real cryptos rollercoaster further to this (future)  digital-money environment and that crypto coins and their hardware /software public ledgers out there what make everyone so question monetary information systems and data curiously. Sure I'm looking seriously at real time balances with all of the digital money and exactly if that they or which of the coins have worthiness.
POWN  Password  O W N
But also I consider Cloudcoin a uniquely improved  second mover upward trending in valuations differently as being as it is overbearing wider pressures of global inflation scaling that set up for CloudCoin a range of metrics the cryptos and blockchain don't at all move or even have their numbers in. Wherever you may live still 95% of governments find their currency and national monetary policies and systems defect, devalued or devaluing and Cloudcoin with upticks because of this. It's the nature of one fault tolerant currency reacting face to face (or like when the tough get going - wink) to the other in decline, contraction, systems breakdown and immobility from logjam and stood up to test of investor or the consumer community vote scrutiny at large that of confidence, and bequeath the space and virtual environment to the better developed and scientifically proven information system of the two. And that's just two currencies squaring off and not more than the cloudcoin as cloud currency but thousands of cryptocoin brands just of cryptocurrency. Two currency models. One unsafe crypto and the other be safe cloud method but here everything over in the digital paradigm shift from old physical paradigm of greenbacks or pennies, nickles and dimes. Cloudcoin Lead Scientist constantly remind researchers that his system Cloudcoin and its counterfeit detection authentication software RAIDA is a second MOVER technology now in the space beside the LED first mover Bitcoin and build up better but corrected from their (bitcoin's) errors and mistakes. Digital cloud currency is money because it is digited representing in integers or some might only call it digit currency. Cloudcoin is as much or is more a perfected technology as than is a currency in some traditional sense and it comes in (second mover) after the first mover but hence the first mover the second strongest and second  best. It all gets confusing to follow these (digits) points. But as now we're all looking at money as a science thank goodness we don't have to represent cents as say, points if, that cloudcoin begins to speak of the one dollar coin or one equivalent dollar as one digit. It's perfect also in that it's not bound to inflation measured factors everything currency backed (Including the crypto's) eventually is held to but propelled by it. Is better described as appreciation valuing. He Sean has said over and over that the Cloudcoin notes will double (split) as many as eight times and the splits will likely come at times fiat woes are at their present worst and national economies in downswing. When you look at true balances in fractional reserve, fiat banking they are not even a group total figured any higher or better than the estimated worth of the improved to nearly perfect Cloudcoin digital monetary information system. To be candid proudly. I advise to take a deep breath while gasping when you see what's up next with currency and crypto backed capital systems. But to each his pown.

Posted by Blogspot at 7:58 AM No comments:

Email ThisBlogThis!Share to TwitterShare to FacebookShare to Pinterest
Labels: DNS, GIRLFRIENDS, LAND, MY 702, My702, NOT, TITLESHIP, YOUR
Newer Posts Older Posts Home
Subscribe to: Posts (Atom)